Julie Deane’s no-nonsense approach to business is awe-inspiring as is her reason for setting up The Cambridge Satchel Company – to be able to send her children to an excellent school. ‘I don’t need to be a founder, CEO, entrepreneur – that isn’t really what does it for me, there was a real reason to it,’ she told Holly in the first ever Holly & Co podcast. It’s a sentiment that the Holly & Co-mmunity can identify with – working for what matters most to us, Good Life goals.

Julie’s story is a great example of aiming for a very particular, tangible goal and becoming laser-focused on achieving it. From coming up with a name to creating a logo, Julie gave herself deadlines. But more than this, she started her business by revamping a design classic: by being authentic to her desire for a practical, affordable bag, she tapped into the mindset of her market before she even knew it existed. The story is not without bumps in the road though: she learned to code so she could build her own site and then had to deal with copycat products, plus the growing pains that come with investment. Here’s what Julie learnt. 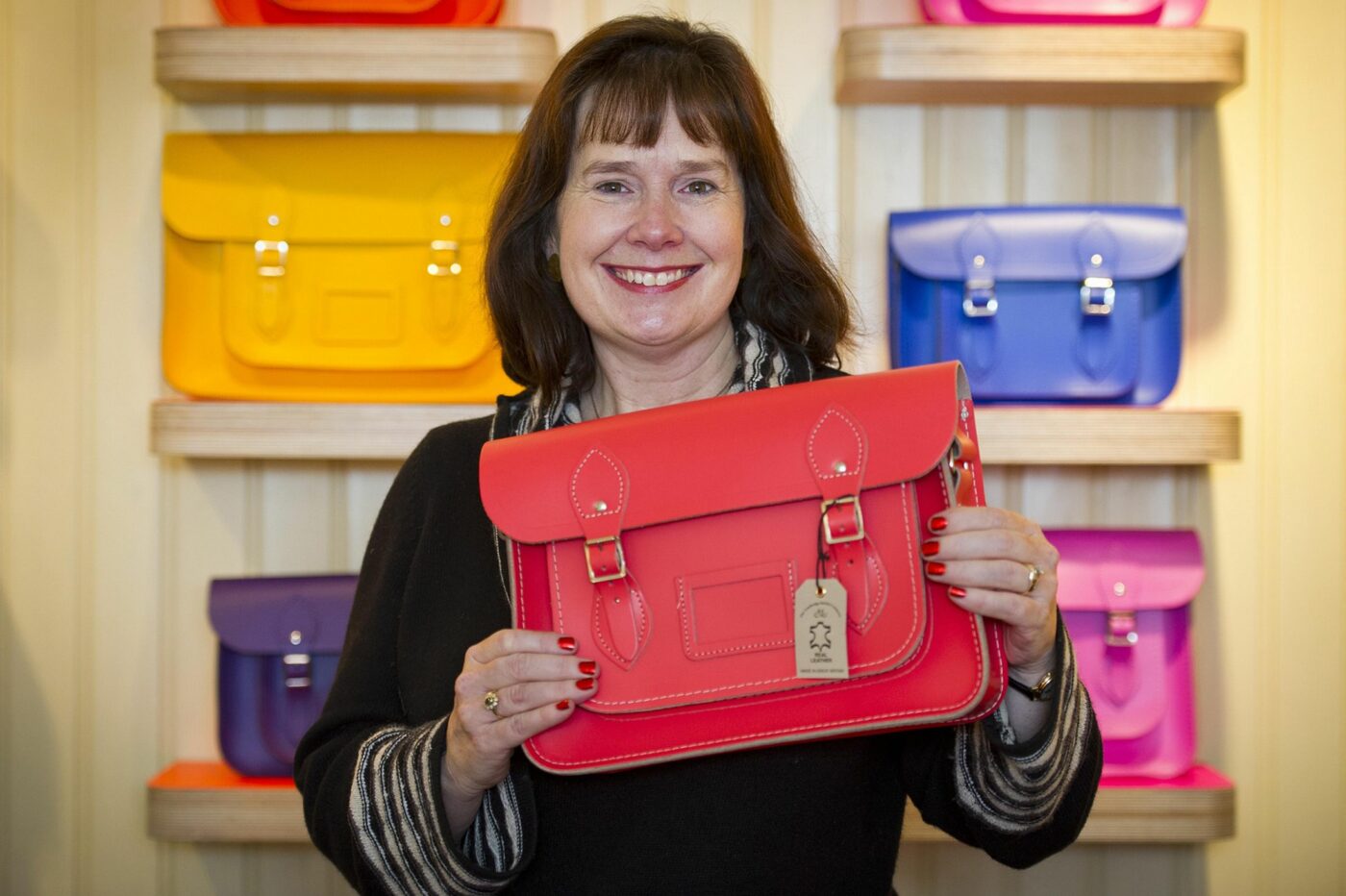 ‘Having a tight budget really helps you think about why you do something.' This will help you zero in on what’s important and what’s not, helping you focus and prioritise, because you value every single pound.

Don’t make money a barrier to getting started

‘When you don’t have much money, you don’t waste money,’ says Julie and she is adamant that the £600 she had to start up The Cambridge Satchel Company was and is still not a small amount of money. ‘It’s enough to find out if your idea is a good idea,’ she adds – especially if you don’t want to start out by borrowing money. When working with local schools on business, she was shocked that one role-play game suggested a scenario where the students were given £100,000 to start up a business. ‘No-one is going to give you that without wanting you to jump through hoops; you don’t need someone putting pressure on you in the early days,’ she says.

Thinking about it pragmatically, Julie reflects, ‘having a tight budget really helps you think about why you do something.’ This will help you zero in on what’s important and what’s not, helping you focus and prioritise, because you value every single pound.

Set yourself goals and don’t dither

‘Don’t wally about,’ is how Julie puts it! This is from the woman who set herself the goal of learning to code in three days so she could set up her website on the fourth. ‘I had to do that’ she emphasises (because her start-up budget was so modest). ‘Getting my children into a fantastic school, a school where they would thrive and feel safe and happy, and really look forward to going every day. That was absolutely the driving force,’ she remembers. In just three months, Julie was then at John Lewis buying her children’s new school uniform.

Never one to waste time on umming and ahing, the name The Cambridge Satchel Company was established in the 10 minutes that Julie allocated to the task. Plus, she created her own logo using Word Art in 30 minutes. We’ll admit, that’s fast! But her point is, if you don’t have a sense of urgency, things won’t get done, so set goals and allocate time limits.

One of the most devastating things that can happen to any business is to have your product copied. When her own manufacturer created a rival brand, The British Satchel Company, using the same leather, colours and dimensions, she had to take action. So she turned up at the manufacturer’s premises with a lorry to pick up her leather and tooling equipment with the intention of setting up her own factory. Julie was determined to do this not only because the manufacturer was convinced she would be back, but because she had a wait-list in the thousands after the bags were snapped during New York Fashion Week. Julie acknowledges that it was one of the most stressful times of her life, ‘I hadn’t had a manufacturing agreement with any of my suppliers, it had been done on a handshake, and maybe that was naïve’. To add to that, in the space of one year, The Cambridge Satchel Company had to shut down 200 websites pretending to be them. Luckily, Julie had protected the brand name and logo from the start.

The Business and IP Centre at the British Library can offer advice on protecting your intellectual property (IP) with non-disclosure agreements (NDAs) and manufacturing agreements. Their website also offers lots of free resources which are invaluable for small businesses.

‘You need to be a control freak, because nobody cares as much as you care about it – nobody cares about the tiny, tiny details that actually do make a difference.’

Your story is your marketing

‘It’s our responsibility to do the storytelling properly’ says Julie and it’s a point that resonates with Holly’s philosophy of emotional marketing – that when your story is authentically told, it becomes the strongest marketing tool you could hope for. Julie elaborates, “This is what it takes to make one of our bags. And these are the people that make them.”

If we do that storytelling properly, people can enjoy the experience and feel an ongoing happiness about one of these bags and they can say to their friends, “I bought this bag, did you know the history of this bag?” and continue to get joy from it rather than just, “Okay, I need a bag, I’ll buy it, I’ll have it by tomorrow and I’ll wear it and I don’t really know where it’s from or where it’s made.’’

Share the details of how you started out – what was the tiny seed of an idea or insight that grew into your business? What drove you? Who makes the items? Stories are how we connect.

You know your brand best

The demand for satchels from The Cambridge Satchel Company meant scaling up became a necessity, but Julie’s experiences have taught her to remain true to herself and what feels right for her brand. ‘There was this feeling of, ‘don’t be a control freak’. But actually, you need to be a control freak, because nobody cares as much as you care about it – nobody cares about the tiny, tiny details that actually do make a difference.’ At one point after investment, the company was seeing losses and Julie was adamant that the company needed to get back to common sense and simplicity. ‘Nobody is an expert at the moment because things are moving so fast,’ she says. ‘At The Cambridge Satchel Company, there’s a genuine curiosity and love of learning which means that we do keep up with how things change rather than a deep-seated corporate arrogance.’

No matter how fast your company grows or how big it gets, stay close to the ground and stay connected to the original values from which the brand grew. If decisions or strategies don’t feel right for you, they probably aren’t.

So there you have it, the things you need to know from the small business-owner who wanted to be able to afford her children’s school fees and went on to create a brand with a cult following. Deadlines, determination, and an eye for detail all contributed to Julie’s success and we hope her eye-opening tips provide you with an insight into starting up your own business.

There's never a right time to start a business

With our busy lifestyles actually starting your business can be one of the biggest challenges. Holly reminds us why we just have to do it and shares tips on how to actually get going.

How to set your business up for success