Whoever said actions speak louder than words was wrong, especially in the case of Marby & Elm founder Eleanor Tattersfield.

Eleanor is the brains behind the letterpress design studio based in Clerkenwell, London since 2012. Eleanor will do anything with words to get her business noticed, even if it does ruffle a few feathers along the way. Eleanor said: ‘It doesn’t matter what it is that puts your brand into the limelight and sometimes there doesn’t have to be a plan. Simply run with the thing that’s pulling you the hardest.’ 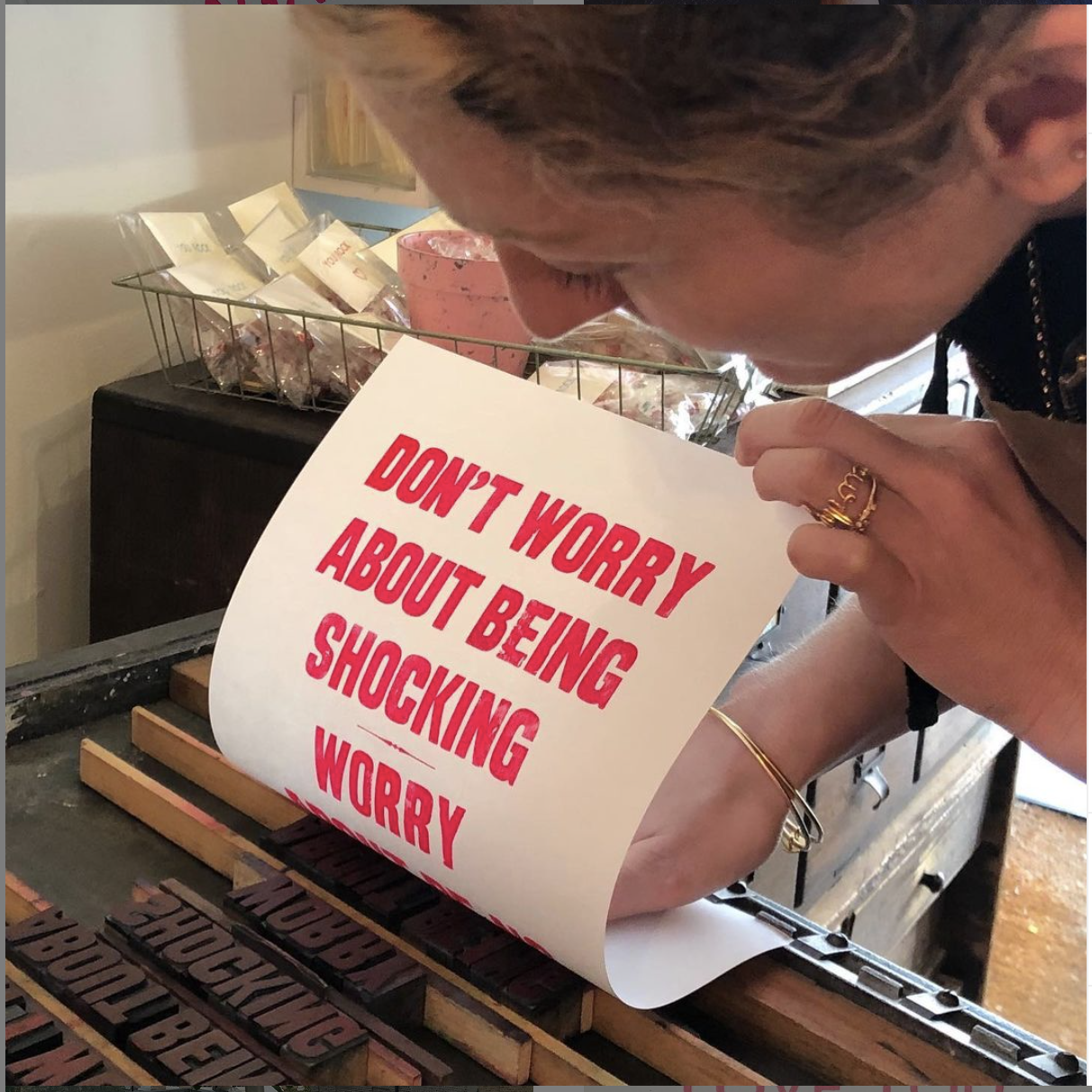 Eleanor says: ‘Some people might think one of my cards is shocking, but the ones that are edging on the side of caution are the most popular.’

‘I didn’t take as many risks at the beginning but I’ve really listened to my market and the naughtier something is or the ones I worry about posting are always the ones that are most liked.’

Talking of lessons learnt, Eleanor told us: ‘It’s about sticking your neck out a bit, that’s been an important lesson because mine hasn’t been chopped off yet!’

‘If you love what you do, it won’t ever feel like work. For me, there’s nothing quite as satisfying as thinking of a funny card, popping upstairs to print it and twenty people buying that day. I love people coming into the shop and laughing at something I’ve written.’

Eleanor’s story began when she saw an old letterpress machine for sale online, ‘I bought it, learnt how to use it and printed my first own letterhead stationery in my garden shed. That design is still my favourite, even though it’s badly printed because I didn’t know what I was doing. It has that charm and innocence which is difficult to replicate when you know what you’re doing.’

Keen to keep her business very much a family affair, with Eleanor doing all the designing, Marby and Elm are the nicknames for her two sons, Eleanor’s sister Charlie manages the shop, their father is the lettering artist, their mum deals with the finances and their brother Tim does the photography and website. All produce is designed, made and packed up in the shop.

Ever since Marby & Elm secured their first wholesaler, they were put on the map as one of the high flyers of the stationery world. Eleanor explained, ‘Liberty were the first wholesaler to take us on a big scale, they were our bread and butter for a long time, imagine that!’

Being stocked in Liberty really gave Marby & Elm the stamp of approval they needed to fly, ‘It was an enormous privilege and we still have a fantastic relationship with them.’

Eleanor thinks the reason she was approached was a number of things, ‘I think it was a combination of my aesthetic, old fashioned look and feel with funny, modern and shocking sentiments!’

When it comes to shocking her customers, Eleanor isn’t afraid to put herself out there for her business, she told us: ‘I’ve done much shocking self-promoting over the years, I was once a mannequin printing in the window of Liberty and Alan Sugar walked by and winked at me!’

Ironically, Sir Alan was responsible for the birth of Marby & Elm, Eleanor explains: ‘I remember watching The Apprentice one night, and thinking, ‘What? I can just go into shops and sell things to them? I’m going to do that.’

Talking about what inspires her, she said: ‘It can be anything from an old advert on the side of a building to something I’ve texted a friend that’s made me laugh. I reached 10,000 followers on Instagram today and a friend texted me saying: ‘Have you got enough people that like you now?’ That might be a card.

The brand’s most popular gift card came after a random customer came into her shop a few years ago: ‘This person said to me, “Have you got a card that says ‘You’re so fucking fabulous’?” I loved it, put it on the shelf immediately and it became a bestseller.’

‘Not everyone will like the shock-factor of some of your work, but a lot will. It’s important to grow a thick skin and embrace the positive feedback, rather than the negative.’

Eleanor has people writing to her daily asking for bespoke cards, ‘It’s actually more work for me because I end up writing all the copy for them, I’m probably adding in 10 years to their marriage!’

A popular lockdown card is one saying: ‘Please can we have fun again?’ Others include the wall calendar which starts in April 2021, ‘pandemic person’ letters, ‘lockdown letterheads’ and ‘quarantine correspondence cards’ as well as posters and candles because people are spending so much time in their homes.

Eleanor’s thought of another genius idea during lockdown which has put Marby & Elm on the map and become a brilliant altruistic project to share common human experiences in the difficult time of lockdown. Proving that her craft is not only cards, but also secrets, Eleanor asked members of the public to send her their lockdown secrets on the back of a postcard, ‘I thought how nice if someone could simply confess something anonymously be it funny, dark or poignant.’

Eleanor describes each one as ‘little works of art’ which arrive by the sack load every single day to her little shop. ‘We’ve had so many different topics from food consumption to sex, I put them on my Instagram and they are little pieces of someones inner life in the middle of this really difficult period.’

‘I can’t believe the time that people have spent making them, and they’re little pieces of someone’s soul, it’s astonishing and I feel very proud to be the keeper of them.’

So what is the future of Marby & Elm? ‘Global, obviously!’ Says Eleanor, before adding: ‘I like the idea of lockdown secret postcards being a podcast with an expert to advise on the various issues people are dealing with during lockdown.’

1. Don’t take offence if people don’t like your work: ‘Not everyone will like the shock-factor of some of your work, but a lot will. It’s important to grow a thick skin and embrace the positive feedback, rather than the negative.’

2. Engage with your customers: ‘I’ve had one of my busiest years ever and it’s down to engaging more with my Instagram followers. I didn’t have time for that before. I was also hand delivering a lot of orders and really connected with my customers that way.’

3. Keep the client happy: ‘Make sure you always have a smile on your face, no matter what. Stay up all night if it means that orders get delivered on time and never be late with anything. I pedal away underwater to make everything seem seamless, even when it isn’t!’

4. Do something you love: ‘If you love what you do, it won’t ever feel like work. For me, there’s nothing quite as satisfying as thinking of a funny card, popping upstairs to print it and twenty people buying that day. I love people coming into the shop and laughing at something I’ve written.’

Holly chats to Eleanor on her podcast, Conversations of Inspiration, and finds out more about her creative process – in between the giggling that is!

Back to Branding
With thanks to our partners at Dell

What makes a good brand ad

Why your brand is the life force of your business

Why brand is the most valuable asset to your business

You are your brand – stand out!