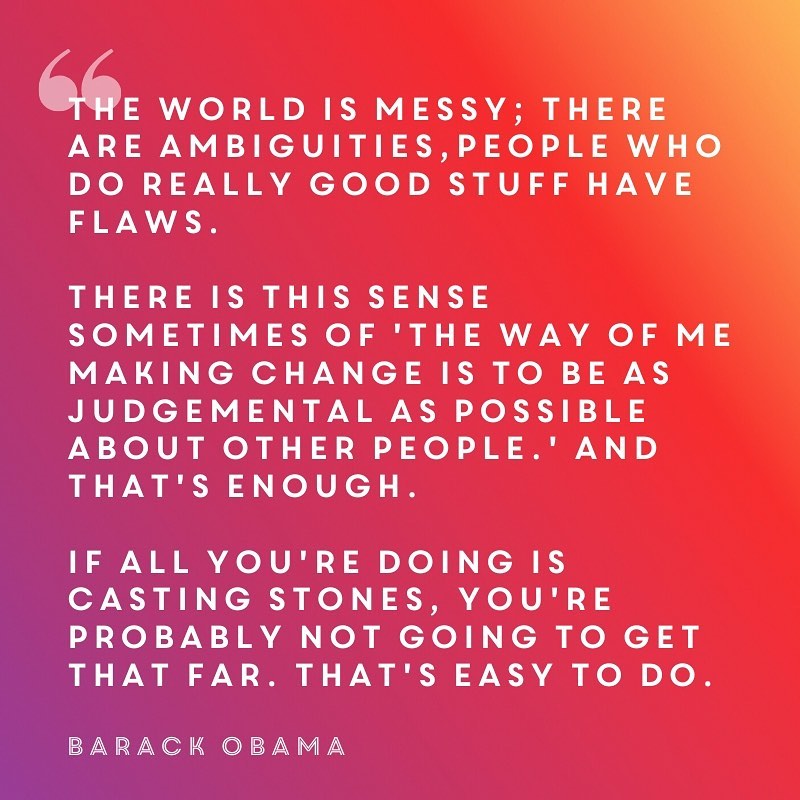 I want to touch on something that’s quite topical this week especially, but generally, it’s all around us. Have you ever felt scared about posting and getting something wrong? Saying something innocent and being reprimanded with a social media punch? I have. I’m so aware of fucking up, I often decide not to post a thought or view, due to fear.

Former President Obama pointed out this week that call-outs can give the illusion that you’re effecting change, even if that’s not true. He spoke about the incessant bullying from social media mobs and the “cancel culture” – people who strive to punish individuals that don’t meet their ideological approval! “I do get a sense sometimes among certain people there’s this sense of: ‘The way of me making a change is to be as judgmental as possible about other people and that’s enough. That’s not activism! That’s not bringing about change,” he said. “If all you’re doing is casting stones, you’re not going to get that far. That’s easy to do.”

Reading an article on this ‘call-out’ culture, a very good point was made from Ruby Hamad about getting carried away and over punishing people “What can often start out as well-intentioned and necessary criticism far too quickly devolves into brutish displays of virtual tar-and-feathering,”

It’s all so meaningless. Surely this isn’t real life? Social Media isn’t real. It doesn’t affect my son’s health? If I can pay my mortgage? You know what I mean… it’s social media, the internet – it’s air. But what’s real is the public shaming and what that does to that individual, if they let it in. That can become very, very real life.

Am I the only one who believes we should show kindness, even if you don’t agree, someone does something wrong – show them kindness and forgiveness? If you disagree so much with something, DM THEM! How would you phrase it, if you were looking at the whites of their eyes? Why oh why, would anyone write something nasty, for all to see? Why possibly would you ‘cancel’ someone for making a mistake? You can’t cancel being human and that’s what we all are. We are born utterly not perfect and that’s what makes us magical. Interested to hear your thoughts?