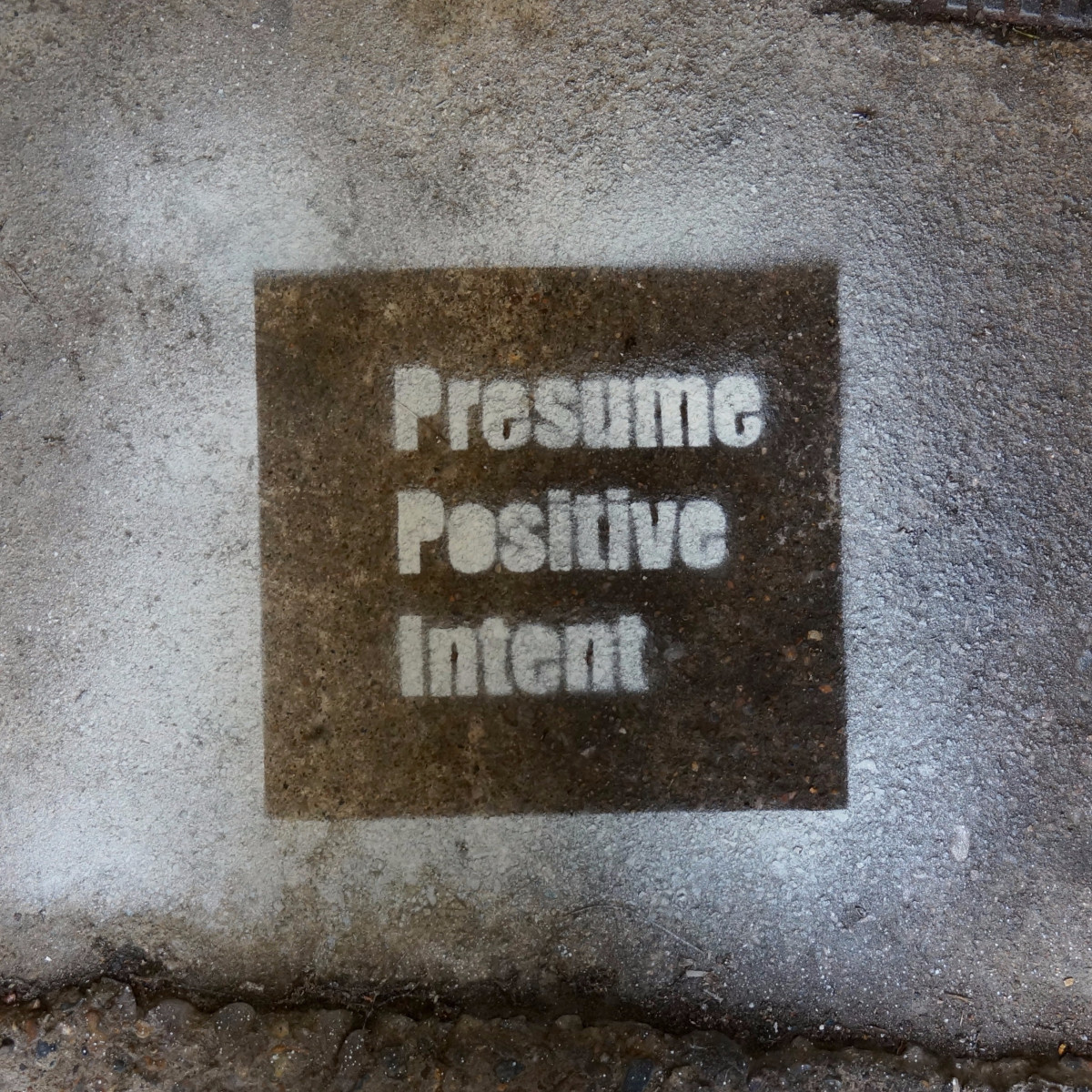 PPI – stands for Presume Positive Intent. Basically, you need to choose to ignore the gremlins inside your head, telling you to presume the worst about/in someone. I know, this is so bloody hard, especially if you’ve had past negative experience with this person or in a similar situation. Your negative bias is hardwired into your brain, so it takes a great deal of practise, if you want to change things.

Assuming positive intent extends to all areas of your life. In the workplace it means you consciously choose to assume that the people you work with, have good intentions. That they’re operating to the best of their ability and that they’re trying. If you assume negative intent, or at best incompetence, you become angry or scornful. And believe you me, if you think these things to be true, your feeling will start to manifest within your behaviour. Your negativity already casting its opinion before you know the facts.

It all came about, when I was listening to an interview with the founders of Warby Parker – I love their company. They make fashionable, but highly affordable eyewear. The whole user experience is amazing, from trying on different frames at home, to being able to do the whole thing online. But better still, every time you buy a pair for yourself, another pair is distributed to someone in need by the company.

Four guys founded the business which they recognised, at an early stage, could run into some complications involving egos! The team explained that they made it a point to meet with each other regularly to ensure the mission was on course and they continued to share ideas. Out of these discussions came the simple mantra of “presume positive intent”. Being co-founders, it was easy to step on toes or get feathers ruffled simply by misinterpretation. They all had vested interest in seeing the company succeed, but as people do, they approach it in different ways. So they all agreed that before passing judgement (on an email, an action, etc.) they would presume positive intent.

I loved this notion so much, that now I use it as my daily mantra. Choosing to ignore the gremlin inside your head, telling you to presume the worst about someone – is hard. Especially if you’ve had past negative experience with that person, or in a similar situation. It’s got to be hardwired into your brain at this stage of life and so it’s going to take practise, to master it. But I’m committed.

I also like that in the workplace, actually in life, it means people around you know you believe in them. That you have faith and confidence in them. Most people will go the extra mile for those leaders, co-workers or friends who believe in them.

I read a fantastic quote by Indra Nooyi, chairman and CEO of PepsiCo – ‘When you assume negative intent, you’re angry. If you take away that anger and assume positive intent, you will be amazed. Your emotional quotient goes up because you are no longer almost random in your response. You don’t get defensive. You don’t scream. You are trying to understand and listen because at your basic core you are saying, “Maybe they are saying something to me that I’m not hearing”.’

In addition to saving valuable energy by avoiding unnecessary stress and emotion (wasted if your negative perception is wrong), assuming positive intent can improve your business in a number of ways:

So, the next time someone sends you an email and you find your blood starting to boil or your on the receiving end of someone speaking to you in a way that makes you feel funny – take a step back and PPI the situation!

If you can’t find the positive, keep the feeling alive and ask them for an open and honest chat. You could be so surprised to hear their truth. You’ll learn so much from them and understand why you were entering this potentially negative space. Remember, empathy, is one of the greatest emotions we can practice.

It’s a fact that 99% of people in this world are inherently good, but it’s also a fact that us humans are full of insecurities, negative past experiences and mostly find it difficult to communicate. Communicating badly affects behaviour and leads to being misunderstood. So a good mantra to tell yourself:

One of the instant things that’s happened within the Holly & Co walls, now the whole team has committed to believing and practicing PPI, everyone feels relaxed. For now it’s allowed to say something, that before, you’d worry would offend someone. The meetings are less ‘tongue tied’ as people speak freely, no longer trying so hard to find ‘just’ the right words. It’s actually quite amazing how much time and the vast energy is used,  if you feel you have to communicate with a bucket load of eggshells. With PPI, you’re safe. You are all safe, as everyone is only saying, doing and thinking things – to help the group. Because they care.

We’ve been conditioned to be suspicious, to think that if something seems too good to be true, it probably is.  If a person offers advice, we might dissect it to figure out what their “real” agenda is.  I’ve been on the receiving end of this, manier a time. And if someone disagrees with us, we may become defensive, because we feel threatened.

PPI stops all of this. I for one, needed to not allow all conversations and interactions to end up, somehow, being so exhausting. Do I feel vulnerable? Yes.  After all, assuming positive intent requires we open ourselves up to a new way of thinking and feeling. And, let’s face it, there is the very real risk that some of the people we are trusting may actually have a hidden agenda. I have been here far too many times. But, I’m not going to let those experiences, turn me into a tongue tied and exhausted version of myself.

At the end of the day, assuming positive intent, both at work and at home – is a nicer and kinder way of living. It allows those who you do trust, your inner circle, to know there’s always a ‘safe zone’ around you.

And better still, according the clever bods – it works. You’ll be more relaxed, happier and live longer! Not bad for a change of wiring.