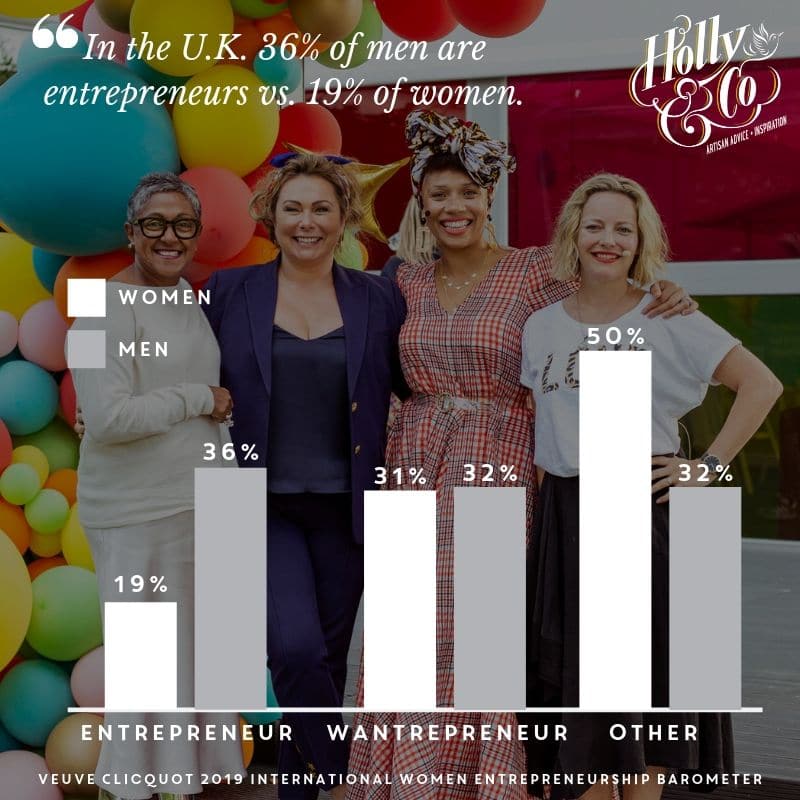 Now and again, I come across reports that the most respected of companies are commissioning. I am always taking notes out of the ‘Rose Report’, which is where the Deputy CEO of @NatWestwas asked by the Government to look into why we have such a disparity between women and men starting businesses. Here @veuveclicquot_wwhave asked themselves the same. And here’s what they found out:
.
Women and men perceive entrepreneurship in the same way – financially rewarding, meaningful, values, being your own boss.  Yet only 50% of women are, or want to be, an entrepreneur, vs. 68% of men.
.
Of the five countries surveyed (Japan, France, UK, HK and SA), the UK has the largest gap between male and female entrepreneurs, with men 17% ahead.
Why are women less likely? Self-belief wasn’t the problem. According to Veuve’s report, women felt more than men that they deserved what they had achieved and recognised it had happened via hard work and not luck Plus, women in the UK are 37% more likely than men to go into higher education. And yet…
.
More than half the population believed it is harder for women to start a business than men
.
Women in Britain still contribute 60% more of unpaid work than men and there is an unequal repartition of domestic workload in the UK. Over 70% of ‘wantrepreneurs’ and not-entrepreneurs (‘other’) believed that it is much harder for women to balance work and family life if they are an entrepreneur than for their male counterparts.
The access to funding for female entrepreneurs is harder and women represent only 9% of the British business angels population.
.
Women fear they will need to demonstrate high levels of authority, not be too nice (or too bossy) and be more careful in how they dress so as not to be criticised!
.
So what do you take on all that? Some things I just literally think can’t be true and other’s I roll my eyes at what feels like a snail pace on progress? What do you think?