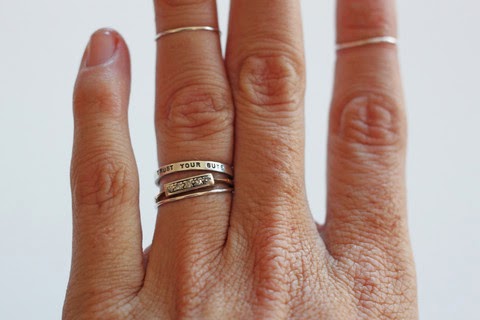 I heard the voice inside of me for years, but as I was running so fast day to day, it was easy to sideline this whisper.

It was easy to put on life’s headphones. Very quickly, I could pile so many reasons, data, facts and opinions on top of this inner voice, it didn’t stand a chance. But, every time I did this, it lead to so much insecurity.

‘So, what I thought, was wrong. The evidence proves it. These clever people are politely disagreeing with me, so I must be incorrect’. Or ‘I told you Holly, this role is now waaayyy above you’, my demons would cry.

For days, weeks and sometimes months I’d follow suite and go along with what I was being told; never fully committed or able to lead, as I had a disconnect. I tried my hardest to believe in the opposite to what I felt – I really did. My gut instinct always seemed too simplistic. My self doubt had forgotten what Steve Jobs once said ‘Intuition is a very powerful thing, more powerful than intellect’. There I was, obviously wearing boots far too big for my size 5 feet and everyone else could see that.

I also didn’t realise that there’s a fine balance between instinct and fear. It’s hard to distinguish between the two. This makes a great deal of sense to me now looking back.

Interestingly ‘You can’t always tell the difference between intuition and fear,’ says psychotherapist Adrianna Irvine. ‘But, intuition tends to be a pointer towards something, not a fearful pull away from something. It’s telling you what to do, rather than avoiding the situation.’ Neurobiology states that intuition is a “right-brain” activity, using the emotional, creative, innovative part of the brain, while the left side is the mathematical, factual part,’ says Adrianna. ‘So intuition,can be dismissed as too airy-fairy.

Time after time, the day would come along, and that gut feel, I’d tried to bury – raised it’s head. An ugly head? Yes, because although it proved I was right or that my instinct was indeed intact (relief!), the consequences were always so painful. What did it mean for the business, for me or for my leadership qualities? The pain it took to undo the wrong that had been done, or to deal with a member of staff that was never right and now needed to be removed. It took us back months in development sometimes, for that one very reason – that my gut’s voice was drowned out.

I know why it happened. I was a people pleaser and believe wholeheartedly that we need to be a ‘we’ and not an ‘I’ to really make magic. But, at the same time, surely when you ‘really really’ know something, this should be respected. Maybe the intuition that was being demonstrated is the very same stuff that built the company? That it was due to this nectar, that we were able to be in the fortunate position debating, in the first place!

As time went on, I really spent some time working my intuition muscle.  Due to certain circumstances, I was almost forced to ask myself what I’d do if I allowed my intuition to rule. Wow, and there it was, a breakthrough moment! I don’t think I’ve walked the planet in the same way since. Liberating is not the word – it has given me a sense of freedom I didn’t think possible.

Mini Journal made by By Bun

It allowed me to hone in on people I knew my instinct trusted. It gave me what seemed superpowers to talk the truth and to concentrate on what mattered. What needed to be done. What does the future look like according to my inner voice and whatever it said, however impossible it seemed, I knew that this was sacred.

As some of you will know, I’m fascinated by the notion of understanding how we are wired. I’ve written about. and will always talk about the right-side of the brain vs it’s left hand side of the brain thinking. This was a ‘light-bulb’ moment in my life, but researching this subject, I’ve realised it doesn’t just relate to the way we behave and think, but it effects our instincts. Of course it does Holly – dahh!

Sensors pay attention to both immediate data from their five senses and from their own direct experiences. They create meaning from conscious thought, rather than trusting their subconscious, limiting their attention to facts and solid data. As necessary, they will happily dig into the fine detail of the situation. They focus on what is immediate, practical and real, and live life as it is rather than trying to change the world. They may be seen as frivolous or short-sighted by Intuitors.

Intuitors process data more deeply than sensors and are happy to trust their subconscious and ‘sixth sense’, gut feel, intuition or whatever you want to call it.

They are good at spotting patterns and taking a high-level view, as opposed to digging into the detail. They like ideas and inspiration and tend to have a focus on the future, where they will plan to change the world rather than continue to live in the imperfect present. They may be seen as impractical, theoretical and lacking determination by Sensors.

What you’ll learn about me, is that even though I love to break things down so I understand them and I automatically will put myself into the ‘Initiators’ box – I also have Sensor qualities. That’s because ultimately we are all a mix of so many parts. But, for me personally, when I’ve gone through all these very corporate personality testing etc – I core quite evenly when it comes to the above. Maybe why I had a hard time, falling into only one camp.

What to look out for and how to handle each type

When you distill it down, the difference between Sensors and Intuitives is this: Sensors prefer reliability of information, and Intuitives prefer speed and depth of insight. This ends up manifesting itself a couple of unique ways. First, Intuitives learn to trust pattern recognition to help them understand information quickly and see things that aren’t ‘there’. Basically, they extrapolate large amounts of information from only a few data points

Both Sensors and Intuitives have an important roles. Sensors often “hold down the fort” – uphold infrastructures that keep us going as a society. Intuitives are generally the ‘trailblazers’– coming up with new ways of looking at and doing things. When you look at these two ways of thinking, it is proven that there are fewer Intuitives (makes sense), as too much innovation and everything collapses. But without innovation, the world stagnates.

So now, when I reflect on a few years ago and the present, I realise how much I’ve changed. I listen almost without falter to my gut. So much so, it worries me and those around me! Holly & Co has been born out of ‘instinct’ and ‘just knowing’. Only time will tell if this was the first gut feel, which was wrong! Reflection has also taught me that there was a time where I was only surrounded by Sensors and the thought of trusting Initiatives – scared the living daylights out of them. So it’s very important before you ever question your gut, to question who’s around you first. If you’re the very subconscious that came up with the idea, then it is more than likely (just like a parent!), you’ll utterly know what to do next for your business and yourself.

Three Tips to listen to that gut of yours:

What’s your initial feeling? Always give your initial response credit, rather than simply dismissing it. It may turn out to be based on fear, but don’t automatically assume it is worthless. Remember your subconscious thought it for a reason. One that you won’t realise why, but it will be based on facts that you already know, experiences you have already had. Your instinct is what you feel and your head has not caught up yet.

Challenge it! How do you know when it’s right or wrong? Or just fear? Experts suggest ‘testing’ your feelings on close friends and family. You may shy away from an opportunity because you don’t think you’re good enough. Or your intuition may be correctly telling you that it’s a poisoned chalice. People with your best interests at heart can help you identify the true feeling behind the fear.

Don’t ignore it! True instinct feels informed, as though an inner voice is speaking a truth you already know. A recent study found that people who were asked to make a choice without explaining it, were happier with their decision a month later than those asked to rationalise it.

Also make sure you’re in a good mood! Research from the University of Missouri found that a positive outlook is more likely to make you more sensitive to your true feelings. So next time you’re listening to your instinct make sure you are also feeling happy. Then your instinct, whatever it tells you, is likely to be spot on.