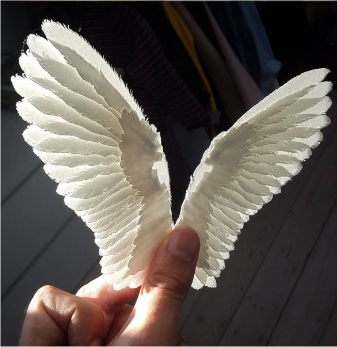 You know the story about the student who opens up the exam paper for his psychology finals at university and finds the question, “What is bravery?” He picks up his pen and writes “This is” and leaves the exam hall.

Some may describe this as foolhardy, rather than brave. Others would say he was winging it. I think he’s my hero!

We all like to think we’re ‘oh so prepared’ for everything. Each ‘i’ dotted, every ‘t’ crossed, particularly when it comes to our burgeoning businesses – our source of income.

These businesses are so precious to us that we feel compelled to prepare for every meeting and every eventuality. But, the truth is that some of the time we will not be prepared. Why? Because we’ve just not got the foggiest!

And surprising at this may be, it may be a blessing in disguise. Some of our best ideas, it seems, come to us when we are forced to act on the hoof.

The best sales pitches, the most convincing presentations can spring spontaneously from within us. That’s because we already know our ‘subject’ inside out. Under pressure, we know which buttons to press.

“Whenever we have something that we’re good at – something we care about – that experience and passion fundamentally change the nature of our first impressions,” says Malcolm Gladwell, the English-born journalist and author of Blink: The Power of Thinking Without Thinking.

He argues that instinct can be our best guide. “Truly successful decision-making, relies on a balance between deliberate and instinctive thinking.”

Best-selling British author and journalist, Robert Harris, says that his best writing is done under deadline pressure. “If I have time to spend days on a feature, it can be dead on the page,” he told a recent literary festival. “But with a piece where I’ve had to wing it, it will sing – literally jump off the page.  I’m a believer in throwing the hat over the fence and going after it.”

The phrase ‘winging it’ originally comes from the world of theatre in the 1800s when actors would learn lines quickly in the wings before performing on stage.

And when we are forced to ‘wing it’ in business, it’s usually in front of an audience – a team of investors or potential buyers.

If we over-prepare for these meetings we could be brought down by what’s known as ‘paralysis by analysis’. In other words, we’re so prepared, there’s nothing natural or passionate in our pitch.

Of course, we want to appear as if we’ve worked everything out and we know what we’re doing. That’s the image we’re meant to project, right? We expect this of presidents, prime ministers, headteachers and lawyers to name a few, and we find it reassuring. But, they haven’t worked things out any more than we have; the only thing they’ve worked at, is the art of improvisation or thinking on their feet.

The UK organization Action for Happiness says that one of the biggest causes of misery is the way we ‘compare our insides with other people’s outsides’. We are all trying to be calm and professional, but really we’re all winging it.

When you manage to whip up a surprisingly delicious meal out of the five unpromising ingredients lingering in your fridge, you are winging it and successfully too!

You just got creative in the kitchen. You can do the same in a business meeting, in a pitch and, at a push, with the bank manager! Get creative and fly with those very ‘clever’ wings!