Letting go of the fear in starting a business

What do you do when you know there’s something else out there that’s meant for you, but you don’t know quite what it is? Sahar Hashemi OBE says one of her biggest mottos in life is “leap, and the net will appear”, which is exactly what she did.

After qualifying as a lawyer and working in the industry for over five years, Sahar knew she had fallen out of love with the profession and wanted a change. Letting go of fear of the unknown, she quit and took the leap to pursue building a business.

‘I could see that other people were shining. They were really blossoming and I was not. I remember this unhappiness, and thinking, what is this? My parents would have thought ‘grow up, this is life and work’s not meant to be fun’. But I just wanted to love it and I knew there was something else there.’

How did she put the fear aside and focus on finding her passion with such dedication, that it led to a nationally recognised brand in just five years? 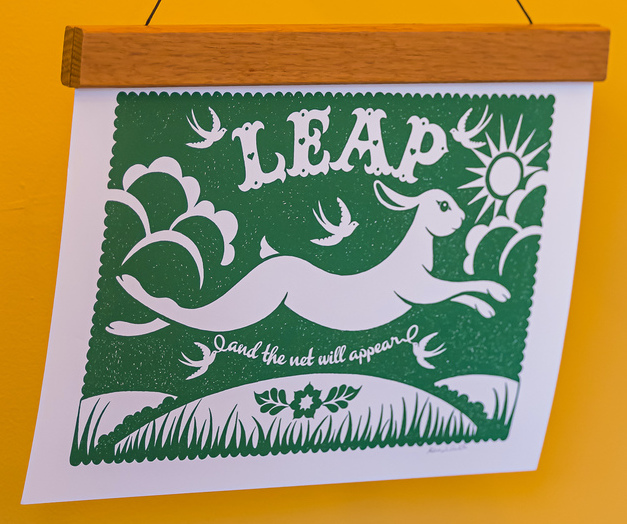 Losing her father at 25 was the catalyst that led her to quit and visit her brother in New York, where she discovered the coffee bar concept. Fast forward five years and, together, they were at the helm of 110 Coffee Republic’s in the UK. But as with all entrepreneurial journey’s, her story is not as simple as A to B…

After quitting her job as a lawyer, Sahar was looking for something new, going to numerous  interviews and headhunter drinks, and it was after one such occasion that the seed for Coffee Republic was planted.

‘My brother picked me up from the headhunters’ drinks and I said to him I’m not used to being back home and not working, I wish we had those New York style coffee bars. If we had those in London I’d go there every morning, because I haven’t got an office to go to. And then my brother got the light bulb and he was like, I can’t believe you’ve said this. I think this is it. And I said, what do you mean this is it? To which he said, I’ve been looking for a business idea all my life. This is it.’

‘And so my advice is sometimes you’ve just got to jump. Just got to go for it and not think too much. Because when you jump, something wonderful will happen. It’s liberation.’

Initially feeling offended that he would think she’d go into business with him when she had worked hard to become a lawyer, her brother, Bobby, offered to pay her to do some research into the coffee scene in London at the time. It was during this search that Sahar discovered there was nothing like it, and the entrepreneur was born.

They returned to New York to do some further research, getting kicked out of coffee bars for taking so many photographs, then headed back to London to get the ball rolling. The first hurdle of choosing the name saw them to the British Library, pouring over great tombs of books looking for inspiration, but it was later that evening that it finally clicked.

‘It had to be all about coffee. I was just thinking out loud when I said Coffee Republic, and then my brother was like, oh my God, that’s it. Then my mom was called in and she was like, that’s it. And you just know that’s it. Just like when you know something’s not right, you also know when something is right, but you just gotta keep banging at that bloody door.’

Next up was funding. Sahar and Bobby called 40 bank managers and met with 20 of them, 19 of whom turned them down. But the twentieth one said yes.

‘I’m quite proud of the 40 rejections until you read Howard Schultz’s Starbucks, pour your heart into it. He got 279 rejections. You know, we always think it’s just us getting the no’s and just realising that greatness comes from the no’s. I mean, the more no’s I get somehow in life, it’s like you’re preparing for the big one.’

This philosophy came in useful when, after two years in business, Coffee Republic and the coffee bar concept took off in the UK, and Sahar and Bobby grew the brand from two stores to 110 in five years.

‘My parents used to say that if it was so easy, everyone would be doing it. It’s the “hard” that makes us great, so I’ve always known that. For me, easy is just, it’s meaningless.’

Quitting a job that took years to train for, becoming an entrepreneur, revolutionising the UK coffee industry and scaling a business at such an astonishing rate are all things that definitely sound hard, scary and uncertain. But not to the entrepreneurial heart.

‘One of my big mottos in life is ‘leap and the net will appear’. I think the worst place to be is at the edge of the cliff looking down. Shall I? Shall I not? It’s just a torturous place to be. And so my advice is sometimes you’ve just got to jump. Just got to go for it and not think too much. Because when you jump, something wonderful will happen. It’s liberation.’

Sahar’s first book is titled Anyone Can Do It, with ‘it’ being ‘becoming an entrepreneur’.

‘I genuinely believe that anyone can do it. Because it is in turning an idea into reality, that journey, that makes you an entrepreneur.’

But what if you want to do it but don’t have an idea, or can’t settle on one?

‘I’m really big on unmet needs. You see, as they say, if the consumer economy had a sex, it would be female. So we make the majority of purchasing decisions and we’re great shoppers. So, for me, it’s this personal unmet need, scratching your own itch. If you can’t find something for yourself, that is the genesis of a great business idea, and you’ll just give yourself that confidence because you know, if you’re missing it, most likely other people will be as well.’

Whether you’re already on your small business journey or still dreaming of starting, taking a leaf out of Sahar’s book and setting fear aside will certainly help you build a strong business that lasts. Have faith that, once you take the leap, the things you need will fall into place. And know that, when things are hard and you feel like giving up, that is when you are on the edge of greatness!

1. Never take no for an answer: Whatever the battle, if you just know it has to be done a certain way, keep looking until you find your yes.

2. Fill a need: Find something that you personally want or need, because if you’re meeting your own need, you can guarantee that others will want it to.

3. If it’s easy, it’s probably not worth it: As Sahar said, “it is the “hard” that makes us great”. Knowing this will help you get through the toughest of times.

In this podcast Sahar shares her experiences of scaling a business, her battles with imposter syndrome, and how selling her business was the most painful moment of her life.