What it’s like to be the breadwinner of the family

It’s a strange feeling, to be the person who’s responsible for the welfare of the entire family. I say this now as someone who’s looked after the only dough coming into the household for the past eleven years. It’s been an odd experience and I’ll admit a lonely one.

I think back to all the men in the past, where it was just presumed they would provide the main family income and potentially how they must (and do) feel… Lonely? Did it make them demand more respect at home? Did it give them a sense of purpose and wellbeing? A mojo that made them feel proud? I think, for women, it can sometimes be a very different journey. Here’s my take on what I’ve found to be true. 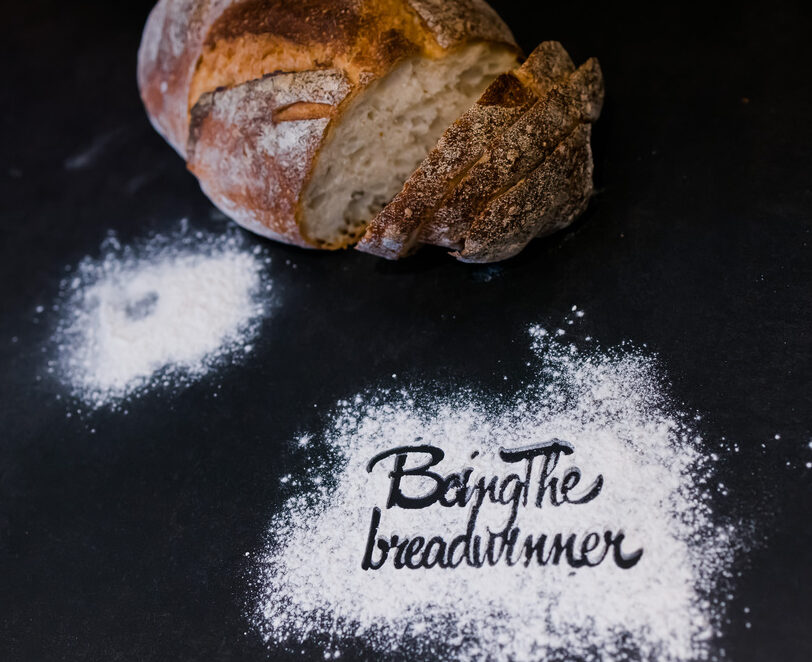 You see, I believe there’s a whole hidden world women live in, when they take on the ‘traditional’ role of a man in the household and the truth of the matter is that this new position should stay kind of invisible. Hidden from others in order to save the feelings of the man at home. Tucked away to save him from shame he might feel, or others might project onto him, for not carrying out his ‘duties’.

But should this be the case? The only way men and women can be equal is if men and women ARE equal, and that includes changing expectations on who does what.

One of the reasons men still earn more is because it’s assumed they’re the breadwinner and therefore need to earn more to provide for their family. If we address this outdated assumption then more men and women will be able to do what they love. The woman might want to work in the City and the man etch glasses etc. But, back to my story…

This is a very real situation I went through and I know other women have too. Rather than supporting and congratulating the woman for what she’s now taken on, it becomes the secret brushed under the carpet. The carpet he’s now secretly cleaning.

‘One of the reasons men still earn more is because it’s assumed they’re the breadwinner and therefore need to earn more to provide for their family. If we address this outdated assumption then more men and women will be able to do what they love. The woman might want to work in the City and the man etch glasses etc.’

I think back to when Frank left his 30-year career to care for our Harry and how things have taken nearly a decade to really settle. After finding ourselves in a position where we needed to hire the third nanny for Harry in under five years, we just couldn’t hack the emotional rollercoaster of it all again. Trying to find someone special for Harry (cue the guilt) whilst holding down two stressful jobs, especially as Frank was so unhappy in his. So the decision was made – Frank would stay at home to look after Harry and it all felt incredibly wonderful, well certainly for the honeymoon period! The house was super clean, the food delicious, Harry was very happy and, to be honest, I was pretty chuffed we were this new modern family. Actually, at this time when Frank left his role, the UK had seen a two-decade rise in men being the main caregiver of households. But, what I now know to be true, and is reflected in the latest statistics in 2018, is there’s been a slow down in this shift, with only 232,000 men in the UK now occupying this role. It’s been reported that men have ‘grown tired’ of the thankless task of raising children!

Something women know far too much about!

Of course, this has nothing to do with the love Frank and other fathers feel for their children, but that change, the shift from being not only the breadwinner or the other working parent to now an existence punctuated by school drop offs and pick ups, is very real – regardless of sex. But when the role reverses, the narrative that’s accepted when you’re the male bringing in the income suddenly can, and did for me, become a hidden monologue, only playing out in the minds of that woman (and maybe her close friends). As there are so few families experiencing this scenario, it’s hard to talk to others and find empathy, because it really does affect everything.

From asking for a certain dress to be cleaned as you have a meeting the next day, to being able to openly request for specific things to be bought at the supermarket as you’d like your child to eat more broccoli, to questioning how much money has been spent that week – every conversation becomes loaded and the eggshells which have to be stepped on become tireless and never ending. The fatigue that builds as you try to navigate your way around not emasculating your loved one, is immense.

Meanwhile, for me, I was trying to build a business with very little money coming into the household. I’d always been better at ‘ye olde spreadsheet’ and so my Sunday was spent on our personal one, trying to make ends meet but with such dread of the conversations that would follow. It was not that Frank was a spender. Having come from nothing, Frank knew all about the fear of not having money, but it was the guilt I think he felt from being ‘the man’ and now not being able to help with money stress.

I always say that societal expectations haven’t caught up to the shifts we’re making. As in, the need for a man to feel like the provider, the protector who takes on the woolly mammoth, hasn’t left modern men. Well, it hadn’t and hasn’t left Frank. This caveman is alive and well in some ways and, even though he didn’t want to, he really did have an issue when it came to being told how to separate out the washing when dealing with my new purchase from Zara as I was rushing out to the next meeting.

He felt lost without the anchor of his role in the outside world.

So not only does it become the ‘unspoken reality’ when you’re bringing in the wage packet, but other things also can become off-limits. As you relinquish your ‘traditional’ role of the female primary caretaker, unlike having a nanny where you are paying someone to work for you, the role of ‘mummy’ is being slightly handed over too. This is something that took me by surprise and caused heartache. Because the caveman in Frank wanted to have his role, something which was all his and actually, I totally understand that, but my DNA hadn’t updated either! The cavewoman in me didn’t want the role of the nourisher, nurturer to become someone else’s! I was born to obsess over Harry’s greens, the school spelling test, the family food shopping and so you can imagine, this all led to many heated conversations as the ‘traditional’ roles butted heads. A lonely place for us both, with very few people to share our journey with, it sort of became our ‘little secret’.

My goodness, it caused so much pain, all whilst trying to build a business, keep a roof over our head and maintain a beautiful life for Harry to be brought up in. A decade later, we are in a different place – thank goodness. Not one where these insecurities and role reversals don’t come to loggerheads anymore, but it’s now at least everyone’s ‘normal’.

Frank is happy to use the word ‘retire’, he’ll now say things like ‘come on Harry, Bubba doesn’t need to load the dishwasher, she’s working hard to keep our lives afloat’ – which is so wonderful to hear. But it’s been a Rubix cube to find ourselves here. I firmly believe it’s an untold story of so many women, of the silent breadwinners, that maybe one day I’ll need to write a book! I can imagine all the women all over the world who’ve travelled this journey would relish in realising that it’s not just them!

So, for all the women reading this, earning the dough, walking on the eggshells, know it will get better. Keep talking about it all out loud with your other half, share the pain points with friends and know you’re not alone.

This is the first time I’ve ever written about this. Truthfully, I almost didn’t know what I thought until I got it out but, like I always say, ‘once you know you can’t unknow’. So I promise I’m going to keep talking about this taboo subject to help build a better and more equal world. Are you with me?

For this milestone episode I asked friends and family to join me as I reflected on my journey to where I am today and how my life as a founder has impacted their own.

Back to Family Life

Why I believe in living a life less ordinary

Taking the pain out of prepping for Christmas

What it’s really like to hire your friends and family