If I’m honest, there’s a pretty good reason that one of our core missions at Holly & Co has always been to support female founders. It’s because I am one. It’s not an easy path. I’ve lived through the highest highs and the most crushing blows. I’ve had many doors closed in my face for being a woman, and for those who don’t look and sound like me, I know it’s been even tougher. We’ve worked relentlessly through all kinds of different economic and social climates, through a diverse range of experiences and decades of life stages. Yet I can honestly say that for me and my co-founders, every step has been worth it.

The kids in our families have grown up seeing that women run businesses. In fact, my son Harry once asked if men could run businesses too as he’d only ever seen us doing it. We’ve made our own money and helped others make theirs. We’ve been able to work in a way that works for us. 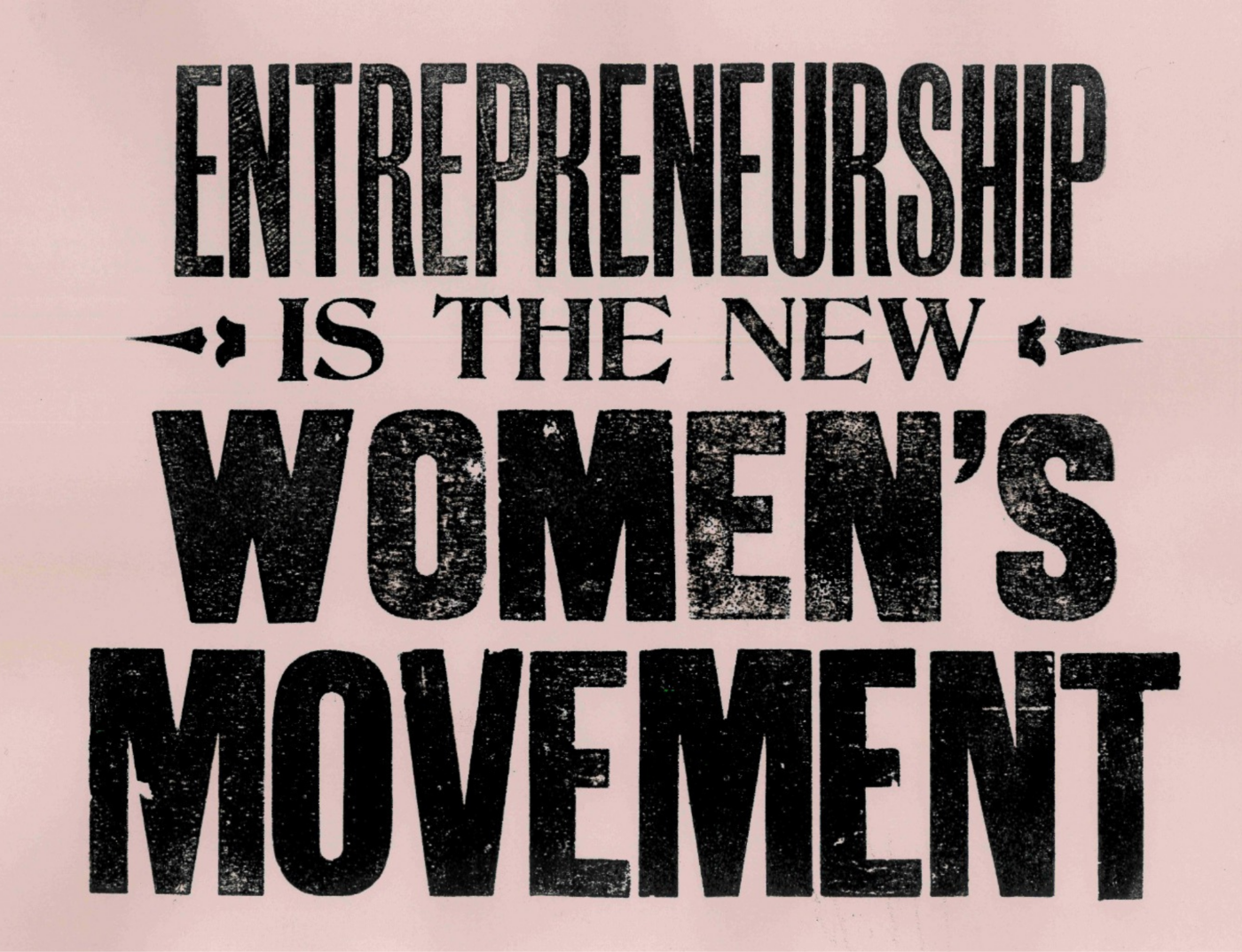 Plus the way we operate is different to how many men do, and it’s clear to see the world needs a softer hand before we implode. It needs to benefit the many, not just the few. It needs to be fair.

It’s become my goal in life to encourage all women to live a life less ordinary — and I believe that running a business doing what you love is fundamentally key to this. After all, if we are living longer, contributing substantially to society and there are more women in the workforce than ever before, shouldn’t we ensure we are happy?

This comes down to one main point: flexibility

True independence is having flexibility as well as secure finances. Dame Stephanie Shirley even spells it with a capital ‘F’ because it represents freedom. It’s about being in a position where we can act — not just react — to the world around us. A few years ago, there was an NBC story that revealed that 74% of women said flexibility was more important than making the most money¹ and wow, isn’t that a huge number? Yet it’s hardly surprising.

In a corporate environment set up around men, being able to work in the way we choose to, being creatively and mentally fulfilled, and staying firmly in charge of our own destinies and finances, has never mattered more.

We need flexibility to achieve equality, and as you know, that can be hard to find in a traditional working environment. In her new book², sociologist Heejung Chung says that even when corporations are progressive enough to offer ‘flexible working’ many women often feel like they end up working harder and longer, or that they might be overlooked when it comes to promotion³.

Setting up on your own allows you to work on your own terms and outline your own measures of success; to not live by someone else’s rules and to have the flexibility to see what you’re capable of without relying on someone else to enable this to happen. It’s why entrepreneurship is the new women’s movement — and we need it now more than ever.

What we’re up against

At the end of 2020, there were 15 million women stuck in a ‘triple shift’ life, doing the domestic work, external work and emotional work⁴— quite possibly as well as trying to be healthy, smart and vaguely sane at the same time. The Great Resignation seemed to indicate that many were feeling unfulfilled, overwhelmed and just generally exhausted.

It doesn’t even seem to be that women don’t want to work. We just don’t want to be forced into a mould that simply doesn’t fit us. And it doesn’t help that the playing field isn’t just unlevel, it’s got more ups and downs than the Seven Peak Challenge.

When it comes to founding businesses, men are — according to a Telegraph report — “86% more likely than women to be venture capital funded, and 56% more likely to secure angel investment. While women consistently receive fewer and smaller bank loans for higher interest rates than men⁵.”

It’s not just down to the financial institutions or investors either. Often it’s our own fear of finance that holds us back and I’d urge any female founder to really do your homework on this. On my IGTV sessions, this comes up time and time again and you can read up on why I think finance is a feminist issue here.

Plus many of us simply don’t have the confidence to go it alone. Even with the best business idea in the world, really believing you can do it and setting up your life in a way that makes it possible, is another matter (if you’re not sure where to start or need a little ‘you can do it’, it’s the reason I wrote this book and set up my Advice Hub). I know many more female entrepreneurs or aspiring founders I’ve met have faced additional barriers based on race or socio-economic backgrounds, too. The playing field is clearly far from level.

True independence is having flexibility as well as secure finances. Dame Stephanie Shirley even spells it with a capital ‘F’ because it represents freedom. It’s about being in a position where we can act — not just react — to the world around us.

The impact of the pandemic on women

As we know, the pandemic also had a huge effect on our working lives and experts fear the Covid-19 crisis could set women back decades. Female redundancy levels rose 212% to 143,000 at the end of 2020. Women have been bearing the brunt of the extra childcare, homeschooling and housework, and mothers were one and half times more likely than fathers to have lost their job⁶. Oh and the women who are still in work are earning 20% less on average than men⁷ — less still depending on your circumstances. Black women are the least likely to be among the UK’s top earners compared to any other racial or gender group, according to a new LSE report⁸. Yet it’s only us collectively refusing to settle for all this that will set us all free.

Now for the good news

The World Economic Forum shared their assertion that it’s likely women actually coped better than men throughout the pandemic⁹. We saw a wealth of examples of strong female leadership and real practical ingenuity. This challenging climate gave us the freedom to pivot — and according to the reports, it was exactly this flexibility that allowed us to fly. That’s why we must work in a flexible way and setting up on our own enables us to do that. Just look at these numbers for a little welcome sunshine.

Setting up on your own allows you to work on your own terms and outline your own measures of success; to not live by someone else’s rules and to have the flexibility to see what you’re capable of without relying on someone else to enable this to happen.

Why I’m passionate about sharing role models and mentors

As we know, representation matters. It’s why Serlina Boyd set up the first UK Black girls’ magazine ‘Cocoa Girl’ because her daughter didn’t have anything to read that featured children who looked like her or gave her a voice. As well as winning several awards (including for Best Newcomer in the Holly & Co Independent Awards), it sold a thousand copies a day. Dame ‘Steve’ Stephanie Shirley still works today at almost 90, and despite transforming the whole landscape of IT over decades, originally had to go by her nickname of Steve to be taken seriously within the industry. Or Asma Khan, who founded Darjeeling Express and has changed lives, with Business Insider making her number one on their list of ‘100 Coolest People in Food and Drink’ — we have plenty of iconic female role models from all walks of life, who’ve branched out and done it alone, despite the toughest of upbringings and circumstances.

We female founders come in many different guises, with all kinds of different experiences and no two of us are the same. So depending on where you’re at on your journey, do get yourself a mentor or share your experiences with other women. Keep favouring community over competition. Our insight and knowledge are our greatest advantage and the Holly & Co network has stacks of it  between us.

And we could do more

If we all shopped from female founded businesses just once a month, we could repurpose £1.3 billion. Download our free Female Founders Empowerment Kit to find out more.

Now is the time to redefine what a founder looks like, to rewrite the narrative and to reclaim our futures. We need to pool our resources, share our knowledge and unite to tell as many people as possible that, you know what?#ThisIsWhatAFounderLooksLike.

Building businesses is a way for women to take our destinies into our own hands, and to get the flexibility we need to make our jobs fit around the rest of our lives — and that’s what makes entrepreneurship the new women’s movement.